It has been done, as someone of you probably already noticed: Scans of Lemon People 1984 october edition, that is. The magazine that actually started Iczer-one and does indeed feature the first chapter of this mighty fine graphic novel. Anyway, this introduction is starting to sound a bit stupid, so we should get on with the contents — since that is the stuff that matters. 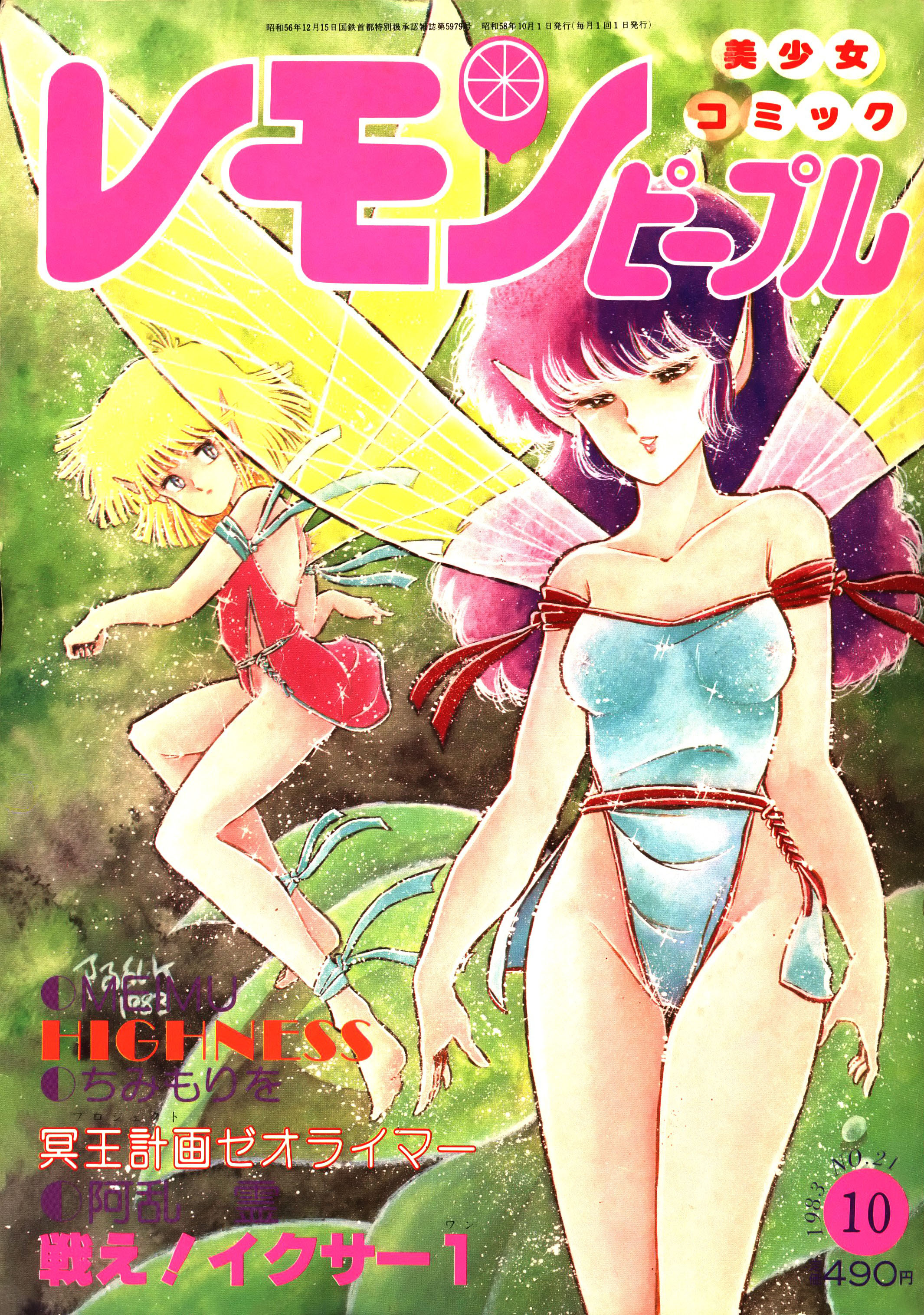 Speaking of Iczer, it is pretty interesting how different the original comic by Aran Rei is compared to Toshiki Hirano’s animated series. It seems that many believe the whole story was by Toshiki Hirano, yet the truth is that it began as Aran Rei’s project. I’m not personally sure which version I prefer as they are pretty much completely different, even story-wise. The animated version has some nice action and is truly finely animated for something made in 80’s — but I also like original catlike Iczer-one! There is also more erotica in the comic (who would have guessed?) while the animation has pretty much just undertones of lesbianism –though they are heavy undertones– it’s understandable they had to tone it down to be more “family friendly”, so not to lose sales and chose to focus on more acceptable gore instead of sex. Looking at those Wai! Wai! People comments that linger on the borders of pages, age of a major part of Lemon People readers seems to be under 18-years old. Even back then all videos, including animation, having any depiction of graphic sex were kinda forbidden to be sold for people under eighteen. Note that it is still a very violent show and certainly not for little kids — remember that were talking about 15-20 year olds demographics here. It was kind of interesting situation; back then comics were still (until Miyazaki, and I don’t meant Hayao) free for all — and sometimes comics with seemingly young demographics even advertised and featured adult animations. Still, what was so bad about Iczer-one being catgirl? We might never know… probably a personal preference of Toshiki Hirano.

Anyways, the scanning of the december issue, a.k.a. volume 23, is underway. It probably hits the EX within the month, if everything goes according to the *keikaku. 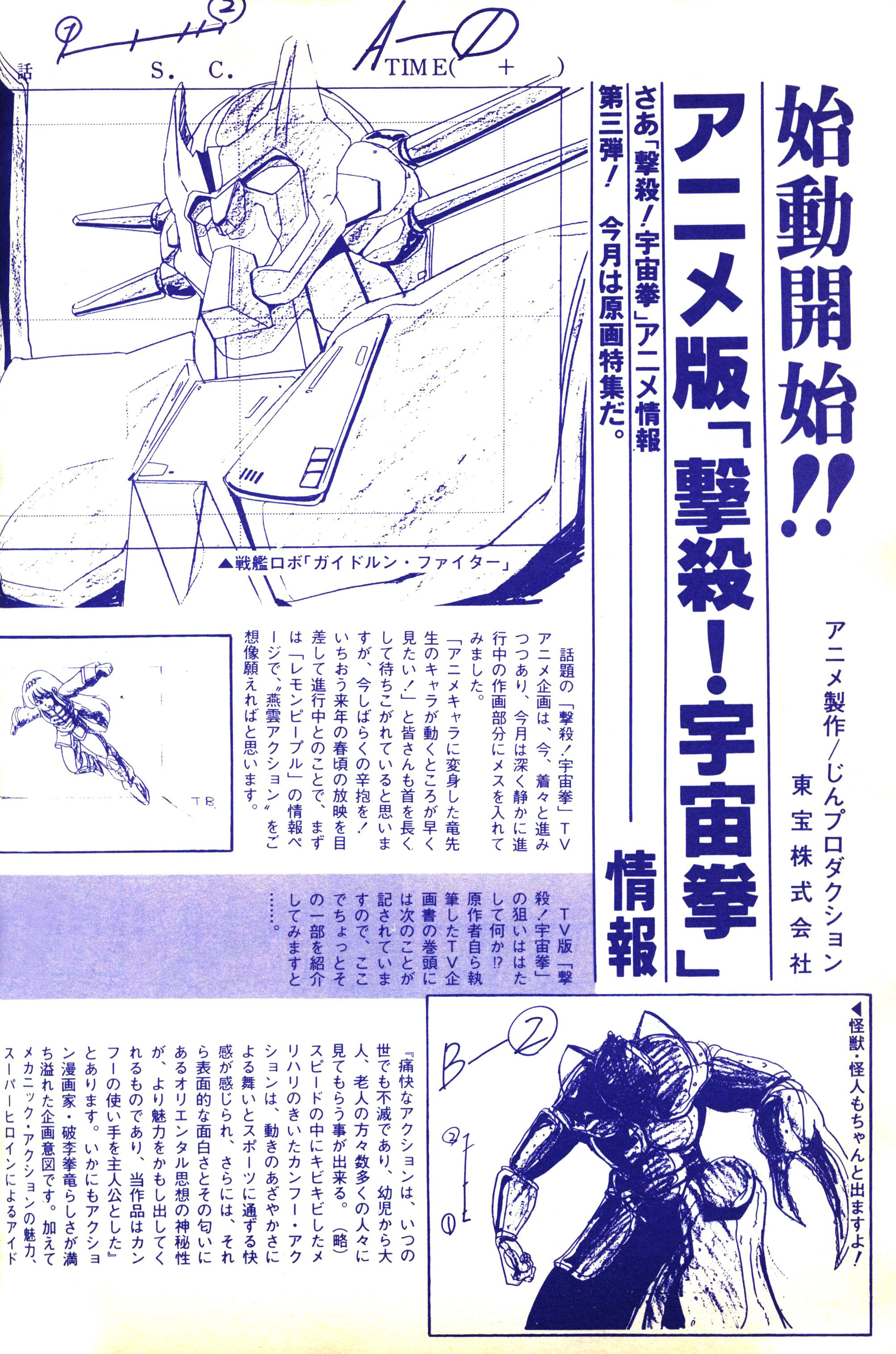 There is also a bit of a tragedy goin’ on in this issue: Did you know that Ryuu Hariken’s 撃殺! 宇宙拳 or “Beat Kill! Space Fist” (note: it can be translated in various ways, so don’t take that for granted, except for Space Fist) was supposed to be made into animated series? Now that would have been awesome, considering it’s (arguably) the craziest series serialized in Lemon People, sometimes beating even the psychedelic imagination of Uchiyama Aki in the amounts of weirdness. In case you’re wondering, yes it even has diapers in at least one chapter, so Aki-sensei is not saved even at his trademark. Guess all that action was too much even for the (supposedly infinite*) 80’s bubble economy animation budget. Oh well, you can still read it as manga… and it helps to know that it was planned for a TV release. There are way too many things there that can’t be shown on TV in Japan, so it would have likely been watered down into a typical mecha series for kids — That wouldn’t have been fun at all! You’d be surprised how strict regulations most broadcasters in Japan have. Then again the watering down stuff to a kids-show level worked well with Nanako SOS… but it was, and is, really tame for a seinen series. 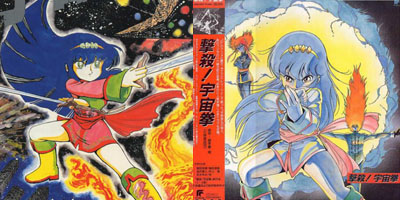 Seems nice, but what is it?

Still, some sort of music album on LP (not Lemon People; Long Play vinyl phonograph record) was released. Maybe it was meant to be soundtrack for some anime, or it is just a so-called image song. Might be some good ol’ tokusatsu-style music there, so LemonComics looks forward to acquiring it.

There is also a preview of Nagoyan Mecha Fetish dōjin by Luna Industria: Some kind of loli sex machines. This reminds us of some certain stuff about how in (lolicon) otaku-erotica of the 80’s, “groping objects” such as robots or tentacles were starting to replace the penis. Think it was from some journal of asian studies or maybe some book of non-academic origin. Then again the theme is interesting and very common in the 80’s japanese otaku erotica. It is only logical when we consider all those mecha shows these artists were likely to have been exposed to as kids. One could also make an argument about circumventing censorship — because machine penis isn’t exactly a penis. Reminds you of O-Parts Oman doesn’t it? We will get to that point eventually, actually, since LemonComics does have the Manga Burikko -issue with information on Awake — the opening animation of Third Special Effects Convention (ウル祭Ⅲ) by Studio Awake (later known as System Gzzy). The very same circle did make the somewhat mysterious O-Parts Oman with semi-legendary robotic penis mecha. There were probably other magazines with some similiar stuff too, but LemonComics’ collection is so vast it’s sometimes hard to remember.

Generally speaking, there are always lots of interesting and nice dōjins featured in these magazines… Makes you wonder where did all that stuff go, doesn’t it? Though when you see them in auctions, the prices are often not a sight for sore eyes. Guess back then they didn’t print as many copies as they do nowadays — afterall, Comiket and other dōjinshi conventions were much smaller.

This also presents a problem with the ethics of LemonComics, regarding releasing ancient dōjinshi: It is much a different thing to scan old commercial publications that have long been out-of-print — and can be considered to be important to share publicly due to their historical value. The history point applies to dōjins too, but them being self-published indie work, we regard this being a much more gray and uncomfortable of a zone. 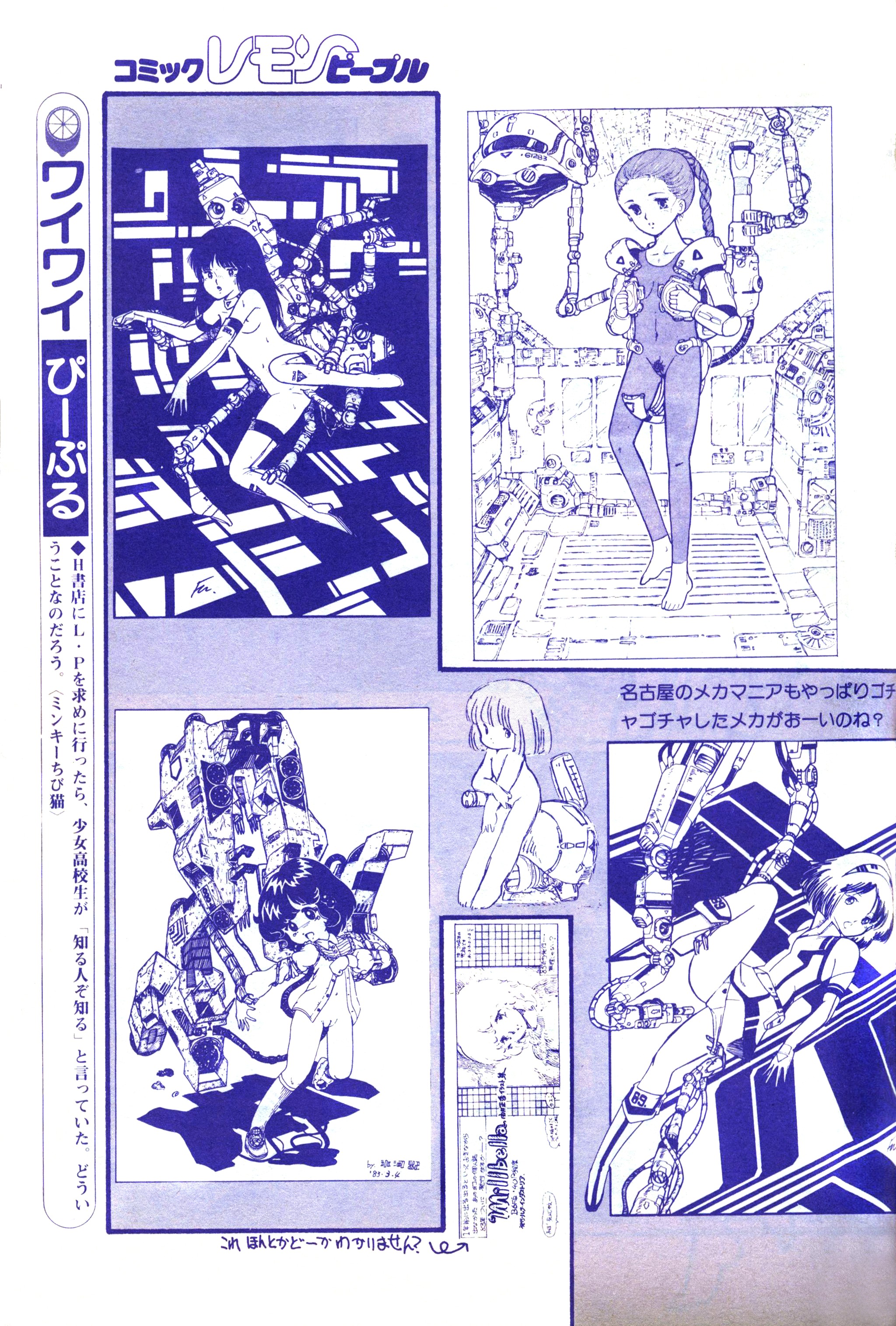 Somewhat related, there is  a (very small) coverage of Comiket 24 in this issue. It includes couple of photos. Lum-cosplay is featured, as can be expected considering the year. Too bad there aren’t more photos, though.

Aside all that, there is of course Ankoro Torio and your monthly dose of random one shot comics. Oh, and Zeorymer begins in this issue too, almost forgot to mention it.

Well, since this blog is now mainly in English, it is probably nice to explain that there are also old posts mainly in Finnish. Feel free to try “google translate” on them, although they have English summaries that should accurately represent their contents without the “humoristic” style of the posts that can only be understood by those fluent in Finnish. These old posts contain some releases that can be of use for English speaking folks, such as the Nanako SOS image song. Quality the releases may vary, as they are from a time before LemonComics learned to edit scans properly. One of them also deals with certain lecture held at a certain Finnish convention. General blogging on history of eromanga and otaku culture was something LemonComics had in planning, but decided to drop in favor of real content. Afterall, it’s better to weave the cultural commentary into posts with some actual content (downloads), rather than just to reduce this blog into level of so-called asian studies. No offense to asian studies meant; there are lots of good stuff on the field and we here at LemonComics frequently read them — but then again there are also poorly researched and culturally western-biased ones at worst. We apologise for any inconvenience this may cause. It’s cool to see beginning, eh? It has been only year or so, but LemonComics has evolved into something else than it was originally supposed to be, though the “historical archive” part still remains same — and always will.